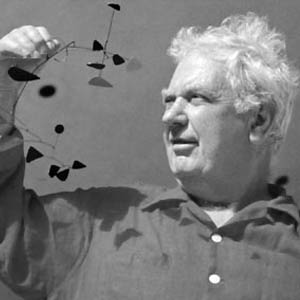 In 1926, Calder moved to Paris where he studied the work of Miro, Leger, and Mondrian. He especially drew inspiration from Mondrian. During his seven years in Paris, he attracted the attention of many generous art patrons, who were intrigued by his sculptures and mobiles. In 1933, Calder returned to the United States and settled in Connecticut. Soon after his return, he gained international attention for his kinetic sculptures and mobiles. From this point on, Calder continued to create his mobiles, while also receiving numerous commissions to fashion outdoor sculptures for public spaces. His work belongs to many important museum collections throughout the world including: the Metropolitan Museum of Art, New York; the Solomon R. Guggenheim Museum, New York; the Whitney Museum of American Art, New York; the Smithsonian American Art Museum, Washington D.C.; the Hirshorn Museum and Sculpture Garden, Washington D.C.; the Museum of Contemporary Art, Chicago; and the Guggenheim Collection, Venice 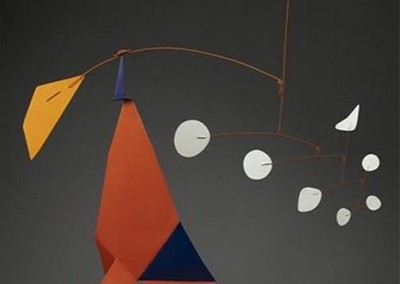