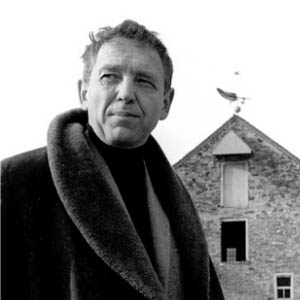 Wyeth was a visual artist, primarily a realist painter, working predominantly in a regionalist style. He was one of the best-known U.S. artists of the middle 20th century and was sometimes referred to as the “Painter of the People,” due to his work’s popularity with the American public. In his art, Wyeth’s favorite subjects were the land and people around him, both in his hometown of Chadds Ford, Pennsylvania, and at his summer home in Cushing, Maine. Dividing his time between Pennsylvania and Maine, Wyeth maintained a realist painting style for over fifty years. He gravitated to several identifiable landscape subjects and models throughout his career. In 1958, Andrew and Betsy Wyeth purchased and restored “The Mill,” a group of 18th-century buildings that appeared often in his work, including Night Sleeper (1979). His solitary walks were the primary means of inspiration for his landscapes. He developed an extraordinary intimacy with the land and sea, and strove for a spiritual understanding based on history and unspoken emotion. He typically created dozens of studies on a subject in pencil or loosely brushed watercolor before executing a finished painting, either in watercolor, drybrush (a watercolor style in which the water is squeezed from the brush), or egg tempera. Wyeth’s work is in the collections of many major American museums, including the Metropolitan Museum of Art; the Whitney Museum of American Art; the Cincinnati Art Museum; the Museum of Modern Art in New York City; the Smithsonian American Art Museum; the National Gallery of Art; the Nelson-Atkins Museum of Art in Kansas City; the Arkansas Art Center in Little Rock; and the White House, in Washington, DC. 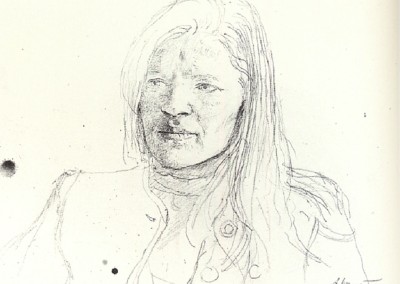