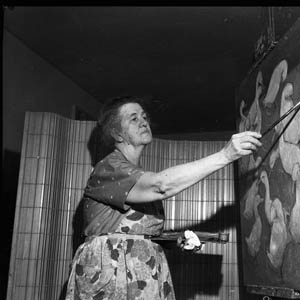 Born and raised in Mississippi, her parents were cultured and they exposed their daughter to the fine arts in Jackson and nearby New Orleans. At the age of four, she saw a piano performance that would influence her for the rest of her life. She studied music at Belhaven College, in Mississippi, and graduated in 1909.

Soon after Hull’s interest expanded into other areas of fine art and she enrolled in a private art classes taught by Aileen Phillips. Phillips who had studied at the Pennsylvania Academy of Fine Arts encouraged Hull to continue her training at the Academy which she did.Returning home to Mississippi, Hull taught art at a girls’ college and worked as a commercial artist until she married in 1917. Her husband was an architect from Jackson who encouraged and supported his wife’s passion for art. Several years later she and her husband embarked on a cross country road trip across the American Southwest, West Coast, and Northwest, during which time she painted landscapes. The couple lived in Florida for a year and then a short time in North Caroling before returning home to Mississippi. Hull’s love of travel is reflected in the many exotic locations and wildlife that she chose to paint. She enjoyed experimenting with color and abstraction, and favored landscapes, still lifes and portraiture as her subjects. In 1929, Hull won second place in the Texas Wildflower Competitive Exhibition with a painting of yucca blossoms. Hull used her prize money to travel to Europe with a large group of American artists. Upon her return, she exhibited her works in New York, San Francisco, and at the Salon in Paris.Hull valued quality and creativity in art, and she studied throughout her life to make her own art the best that it could possibly be. When portrait commission dwindled due to the nationwide economic depression she chose to use this time to improve her skills as an artist. She hired local out-of-work farmers and field hands to pose for her. These paintings of sharecroppers and tenant farmers were among her most prized accomplishments. In 1975, the governor of Mississippi declared October 22 “Marie Hull Day” to commemorate the impact she had on the arts in the state. Hull died in Jackson shortly after her ninetieth birthday. Her work is in the collections of the Mississippi Museum of Art, Jackson; Southwestern Texas Normal School; Witte Memorial Museum, San Antonio, Texas; and the Mississippi Art Association. 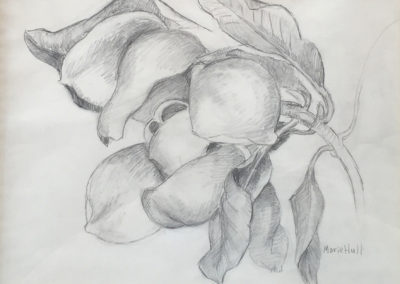 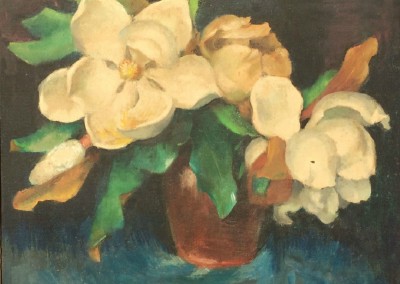